Chloe and Clement, the residents of International Share House 634 came back from a trip to Osaka, and they had so much fun in their trip!

We spent the first night with our friend, and we found a hostel from the second night. The hostel was located in a fairly remote area of ​​the center, and it was poorly maintained. The air conditioning was rotten and broadcast a dirty moldy smell throughout the room, and there were plenty of mosquitoes in the shower.

When we went to Namba and Dotonbori canal, there was a concert in the streets of Ebisu-bashi bridge. It sounded nice. We found a place where they were selling 8 pieces of takoyaki for only 300 yen. I bought it, even though I wasn’t hungry. Takoyaki is so delicious!

We also went to Osaka-jo Castle. Inside the castle is a modern museum, but the building itself was beautiful, especially the view from the top floor. Then we went to a nearby park for few beers and relax. We also ate okonomiyaki, it was too yummy!

Shinsekai was an interesting neighborhood. We were told that the Tsutenkaku tower was small, but from below it seemed enormous. His form was pretty special and interesting. We went to a restaurant in Shinsekai, but it was so crowded and the staff were not able to take care of us. They spoke only Japanese, so I struggled to ask for plates and napkins. Nonetheless, Kushikatsu were really good.

We went to Nara too. In Nara Park there were many deer and deer, which had cute atmosphere from a distance, but when I gave them food they followed me and bit me! Deers are rude! But I could stroke them and it was really nice. There was a huge statue of Buddah inside the temple. There was also a beautiful shrine in the middle of a beautiful forest.

Osaka station is a beautiful building, and when I am in, it makes me feel like I want to become an architect.

When we were in Osaka, we were eating takoyaki everyday. Takoyaki in Osaka are so soft and creamy! I love them!

We came back from Osaka to Tokyo, and when we got to Asakusa, we felt that we are at home now. International Share House 634 is a place where I feel ease and comfortable. 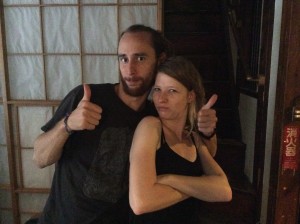 The position is for native Japanese speaker only.

Get free accommodation in exchange with service.